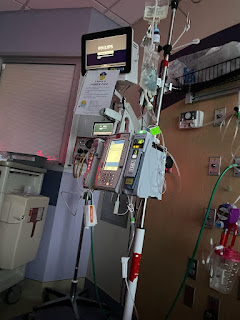 This has been quite the difficult month. Azer ended up getting a virus which made him pretty sick with fevers. He went to clinic to get checked out. Unfortunately, he hasn't been doing breathing treatments as much as he should. It is difficult to make time for treatments when he wants to be out with friends and when he comes home from work late at night, especially when he says he doesn't feel that bad. The clinic has been trying to work with him on ideas on how to fit it all in, and what can be cut out as long as he tries to stay compliant. His lung function has been steadily declining because of not taking medications and doing breathing treatments consistently.
Unfortunately, this is what many adolescent/young adults with CF go through. They choose life, friends, work over CF, and ignore their health until sometimes it lands them in the hospital not realizing what they are doing to their body. Ronnie Sharpe went through this as well. His blog post here is especially helpful.
http://runsickboyrun.blogspot.com/2016/01/being-parent-to-teenager-with-cystic.html?m=1
He hasn't put on any weight in quite a while. It has been stable, but they believe his body has been compensating by using his muscles as fuel. He has been eating very well, but the doctors don't believe that he can gain weight without using his g-tube. They said he has been experiencing "starvation brain" from not doing his G-tube feeds.
The doctors recommended that he get admitted to the hospital, as his lung function fell even more this time. He felt that he might be able to avoid the admission with oral antibio
tics and steroids, but late that night, his fever spiked, and he went back to get admitted.
They had an EKG done as one of the medications can rarely cause heart rhythm issues. The EKG results seemed to indicate that the right side of his heart was enlarged. They next day, they did an echocardiogram. It showed everything was perfect with his heart. The pulmonologist said that the likely reason his EKG was interpreted that way was because Azer has lost so much weight, that it makes his heart appear too large for his body.
The hospital started him on the usual antibiotic for his MSSA. His lung cultures came back that he is now culturing two new bacteria: psuedomonas and achromobacter. They added two more IV antibiotics. Shortly after they added the new IV meds, Azer began to have mental confusion. He has trouble finding words, is having trouble remembering many things. They had the psychiatric team come and evaluate him. They ran a few tests. They thought perhaps he was showing signs of depression again. They have started him back on his ADHD and depression medications at low doses to slowly taper him back to theraputic doses. This hasn't helped. He couldn't spell a simple word backwards, or say the months of the year in order. He is having trouble sending text messages, and has to make phone calls. He doesn't remember sending some texts, or some conversations. Doing school assignments has been impossible, as he can't comprehend the words he's reading. After a week of feeling like his concerns were being dismissed, I finally stepped in and said this is not depression or normal for him at all. After looking up medication side effects, I found out that one of the IV meds he's on can cause temporospatial disorientation. The CF pulmonologist that is on the floor this week finally recognized what Azer is going through and validated our concerns. It seems to be caused by basically a perfect storm of the IV medications he's on. It seems they want to continue both of them for double coverage of the pseudomonas, even though it is causing distressing side effects.
His glucose levels have been a little high, as well has his liver and kidney enzymes. He has been working hard on keeping his fluid uptake up, he is even above 2x what he should be drinking, but all the levels are still kind of high. They aren't really concerned about it as it's temporary from the medications he's on.
His lung function has been slowly going up over the week since admission, but yesterday it went down a point.
on October 26, 2021