CPT, The Vest and IPV

So, January of last year, I posted about our Respiratory therapist bringing up whether Azer tried the Hill-rom vest before.  I realized today I had never followed up with a post about whether anything came of it.

It seems most people in the US who have CF ended up with the Hill-rom vest. Back when Azer was sized for a vest, the only one he was big enough for at that time was the vest by Electromed. Nothing against that particular vest (what works for one person with CF may not work for another), but it never seemed to work for him. He would never cough or bring up mucus, ever. So all these years, I have been doing manual, hand CPT. It was helpful when my husband began helping me with CPT, as it lightened the load. We invested in a massage table that could adjust in height to make it more comfortable to stand for long periods of time. We also bought plastic ramps that helped him lay at a decline for autogenic draining.


Doing manual CPT is very effective for Azer, but it can be physically exhausting for us, and also sometimes it is uncomfortable for Azer, especially if he is sick and his chest and lungs are sore.

We also do assisted exhales (Azer likes these). As CF creates obstructions than can be difficult to move by huff coughs alone, these help him bring up some of the bigger mucus plugs.
So, last year when our RT brought up the possibility of trying out a different vest on a trial basis, I thought, what do we have to lose? Our RT put the call in, and soon a nurse came to our home and showed Azer how to use it. Within seconds of him putting on the vest and turning it on, he began to bring up mucus. We were both so surprised. After so many years of trying to get his old vest to work using every setting it had, here he was effortlessly bringing up mucus.

What a weight off our shoulders! We were now able to leave the house and not worry about getting back in time to do a half an hour of manual CPT. Azer felt more independent and confident that he could do his breathing treatments on his own. He was also able to leave on youth trips and sleep overs for the first time, knowing he would be to get effective mucus clearance without depending on us. He can get consistent breathing treatments over 4x a day when he's sick without worrying about putting a huge strain on time and our physical abilities. 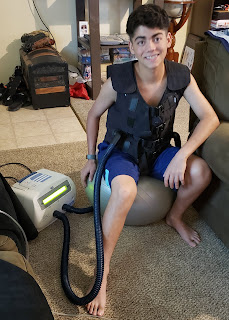 It took some time, but eventually our insurance told us it would be paid in full!

Last summer, when Azer was admitted, he was able to try out the IPV for the first time.  The IPV (Intrapulmonary Percussive Ventilator) works like a powerful nebulizer, and pushes percussion air into the lungs. He liked it a lot, so while we were admitted, we asked about the possibility of getting one for home use. This can be incredibly difficult to get insurance to pay for one. It can also come with an increased risk of getting a lung bleed, due to it being quite aggressive. The machines for home use aren't nearly as strong as the ones used in the hospital, so they are safer. 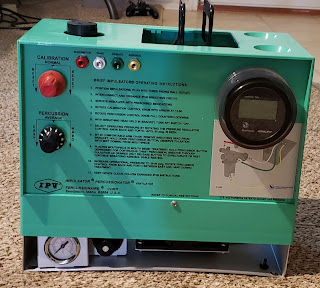 The company that we were supposed to get the IPV from informed us that we wouldn't find out IF the insurance company would cover it until we received the machine and started using it. I felt that it would be sad that Azer would receive the machine, and benefit from it, but then we would possibly need to send it back if the insurance company wouldn't pay for it. I went ahead and said yes, despite the risk. Our RT and the company said they would fight for us to keep it if we were denied.

Azer used the machine for several months, and really liked it. He would use his vest in the morning, and the IPV at night. One day, the tubing started leaking air around where it connected to the machine. The tubing typically is replaced every 6 months. When I looked at the tubing closer (it's also called the circuit) I noticed mold had been growing in it! Azer was annoyed when he saw it, and said, "great, so it's basically been pushing moldy air into my lungs". I called the company to see how we could get a new circuit. Since the insurance had been continually denying the machine, they wouldn't pay for the circuit either. The company told me that the replacement circuit would be $500. I told them I could not afford this, so unfortunately, Azer was unable to continue to use the machine.

At our next CF appointment, we told the RT what had happened. She had an idea to try out another medical supply company. It took quite a few months, and a LOT of work on her end, but eventually one day the new company called us and brought a new IPV machine over.

The machine itself is much lighter and comes inside this cool carrying bag. The circuit is much less complicated, as it only has two tubes. 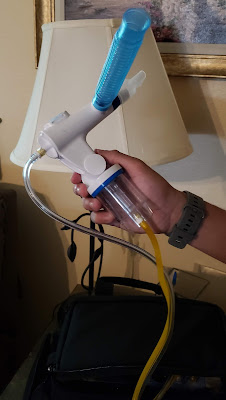 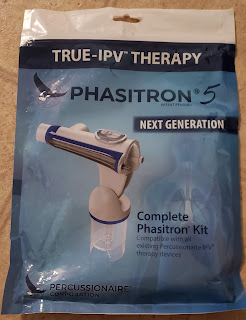 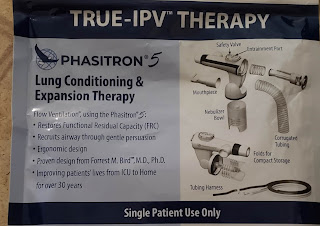 The handset is also very different. It is a new style, and we noticed on Azer's most recent admission that they are using this handset in the hospital as well. Azer says this IPV isn't has strong as the one in the hospital, nor is it as strong as his previous IPV machine, but it still moves the mucus out.

So far, it seems like the insurance company is willing to pay for this IPV machine!
on June 26, 2019