So today was mostly just a follow up for PFT's to see how his lungs are since he's been on steroids and antibiotics for a few days. His first few blows were exactly the same pre-albuterol last visit. They tried a different blowing technique which apparently works well for him when he's sick, and he blew just a bit lower than his post-albuterol test on Wednesday. 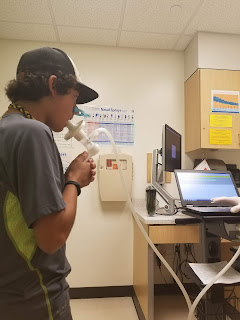 So his numbers look good, but numbers look good on paper, but don't always reflect the patient. Azer told the doctor that his lungs still do not feel good. He said they feel the same as they did before steroids. Usually, steroids make him feel a lot better quickly. The doctor did note that he's only been on this treatment for a few days, and it may take a little longer to start feeling the effects. She told him to have fun on our family vacation, and that if when he gets back, even if his PFT's are up to nearly normal, if he still feels like his lungs are sick, she can admit him to get his lungs back to normal before school starts. The doctor added that she's adding a test to his lung culture to test for non-TB mycrobacterium (we really hope it's not this, as it can take over 6 weeks for the culture to come back and the treatment is very intense and long. This bacteria grows very slowly, and treatment for it can take up to a year). 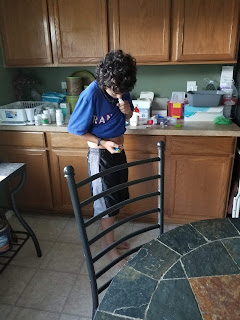 CF can be overwhelming and can really take over your day if you're not careful. Azer definitely felt those pressures when he was away for a week. Even at home, with not much else going on, it can be tough. I thought this picture really demonstrated him trying to fit everything in so he could go be a teenager. He was doing his inhaled Tobi podhaler and giving himself his growth hormone shot at the same time.
on June 29, 2018