This was basically a follow up appointment after Azer's hospital visit.

So, when Azer started growth hormones, I put him on 5 cans of formula a day instead of 4 to try to keep his nutrition up, since he hadn't gained any weight in quite a while (he also wasn't growing either). He gained two pounds since then, so the GI doctor said we can go back to 4 cans a day, since he's been having reflux and feelings of fullness in the morning from the extra formula.

The GI doctor said that in the event we have to use the antibiotic, Levoquin again, and are forced to stop Erythromycin, she said it might be worth while to temporarily give Azer a G-J tube instead of just a G-tube. This would help assure that he isn't refluxing formula into his lungs. Another alternative would be to temporarily start Reglan which worked wonders for him in the past, but does come with a black box warning.

His PFT's went up, above where they were in October. The doctor was pleased with those results. She allowed us to look at his X-ray, and explained why the radiologist's report can sound completely devastating because they really don't see the full picture.

The doctor took her time and really explained to Azer the anatomy of his lungs, and what he was actually seeing on the X-ray. 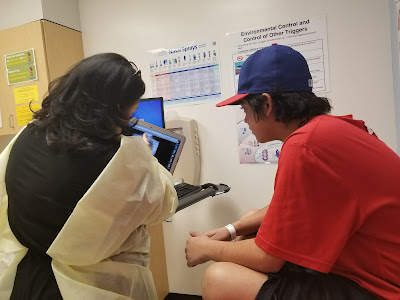 While clinically, he looks great, and he didn't culture anything serious, Azer told the doctor he felt like his lungs still feel sick and congested. She said that even though the antibiotics are really causing a lot of GI problems right now, that we should finish the course. She listened to Azer's lungs, and heard some wheeze and noises. She said it was a good thing that the noises moved around when he coughed or did treatments. She is adding a secondary inhaled steroid to the one he is using already. This is temporary until he starts feeling better.

Regarding, the continued bloody mucus Azer's been coughing up, the doctor said as long as it's mucus with blood in it, and not blood alone, or blood not mixed with mucus, this blood we are seeing is just from irritation, which is likely coming from the Hyper-sal, steriods, and the dry, winter air.

Azer hasn't been able to return to school yet, and the main problem is how many times he's been in the bathroom a day. We counted 8 watery diarrhea BM's yesterday, and the average is 6-8 times a day since he's gotten discharged. He is almost done with Flagyl, and the GI doctor said Flagyl doesn't always work immediately. They took a stool sample to check for any other bacterial overgrowth that might be causing him issues (when Azer came back from "getting the sample", he said, "I am not nurse material").

Based on this situation, we will be doing homebound school for the next few weeks, which gives more time for Azer to work on staying hydrated, and more time for extra breathing treatments (which, based on his PFT's, seems to be working!) I contacted this school this week, and the staff worked hard to get me the information needed. I was able to get all the paperwork and brought it today for the doctor's signature.

I brought up the PEP device we got at the hospital with a nurse and the Respiratory Therapist. They said they don't have them there at clinic, and really hadn't seen them used. While we were all talking, we got on the subject of the Vest. The RT was surprised that we had a SmartVest. She mentioned that most patients use the Hill-rom Vest, and was able to quickly call the company and find out if we could try one out on a trial basis. She said once we get our information settled with Hill-rom, we can be put on a waiting list for a new Vest called the Monarch. This new vest is portable, and is supposed to work more like hand CPT rather than just pressure and vibrations.

Side note - Wednesday the 17th, after he'd been on the Prednisone for about 5 days, his sense of smell started to return a little. Two days later, he can smell nearly everything. So, it's either the steroids reducing inflammation, or the antibiotics killing an infection in his sinuses.
on January 18, 2018