It's been about 6 months since Azer's last appointment with ENT. He has lost most of his sense of smell, and can only smell strong smells. It's also been nearly exactly a year since his surgery to remove polpys.

Whenever Azer does his nasal rinses with the Netipot squirt bottle, he says it is almost painful, as it feels like the water stays up in his sinuses instead of draining out.

The ENT doctor saw some polyps and edema. It was very swollen and irritated looking as well. The doctor said it was up to us to make the decision about the polyps surgery. He reminded us that it will be a regular, periodic thing. Azer felt like at this point, he wasn't ready to have surgery again, and said that being able to smell wasn't that important at the moment. Unfortunately, by waiting, it will only increase the number of polyps and may become painful at some point. 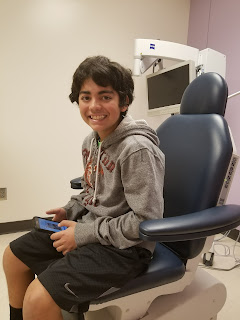 The doctor said to wait 6 weeks and see how he feels about surgery then. In the mean time, Azer has to be vigilant with his nasal rinses and also needs to restart Pulmicort drops in each nostril. Hopefully this will cut down on the inflammation.
on December 21, 2017