Day 2 in the hospital 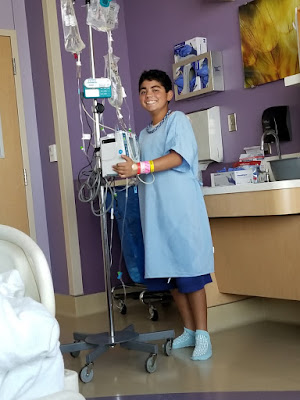 Azer ended up having to get stuck multiple times in the fingers and had several butterflies in his hands. The poor nurse was trying to get blood to test his potassium, but he kept clotting and she was having a difficult time. 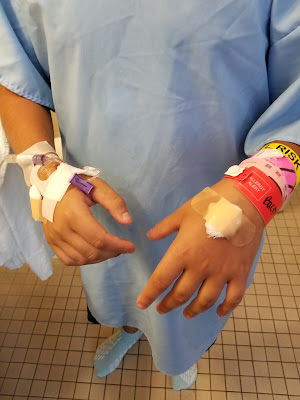 He finished his night feed for the first time in a few days and held it down. He also did his morning feed and feels pretty good.

We were a little disappointed that we asked for hand CPT last night, and the RT still used the Vest. So, this morning the RT for today was questioning why we did hand CPT. Both Azer and I said the Vest does almost nothing to help him clear his lungs. The RT had me show him how I do CPT and was impressed. He recommended something called a IPV as something Azer could possibly use in college. I've read about it before, and sounds great, but when I asked a doctor about it, they said usually it's not prescribed for home because of the risk of lung bleeds.

Our dietician came in and will give us a list of foods that are high in potassium and also give us a daily fluid gole. She believes this incident might have been from "the perfect storm" conditions. We had a cold front, and then it's been suddenly hot for the past week. The dehydration probably started from last Thursday's baseball game, Friday he had a tough athletic period and had to run 8 laps in the afternoon heat, and then Saturday he pitched almost the entire game. He then played outside for quite a bit of the day. For a few days, he hasn't been able to do much of his formula feeds, has been nauseous and has vomited a few times as well. All these factors likely contributed to his dehydration.

One of the nurses came in and said that Azer's blood work from today compared to yesterday's is strikingly improved.  The results of the EKG weren't too concerning, but his QT was prolonged. The nurse also said Azer's creatinine and BUN was high yesterday, making his kidneys work hard. They said that his blood counts were high because of it being so concentrated. So, Azer was definitely in a dangerous place, and I'm glad we brought him in. We might be able to go home tomorrow if he keeps looking good, but we are definitely going to have to work on keeping his potassium and hydration up especially if he is going to be outdoors.
on September 18, 2017