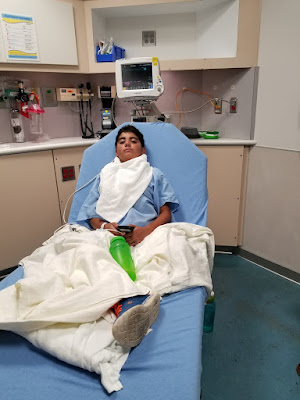 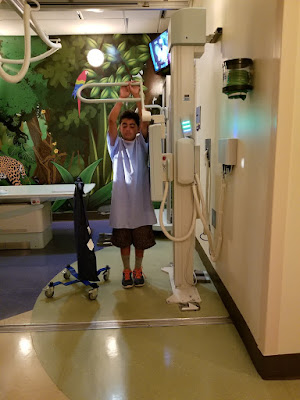 So, here we are at the ER. While we've been here, his symptoms improved over a few hours. They did an x-ray and saw his lungs are slightly better than they were last week.

His sodium levels were pretty good. Unfortunately his potassium was low, and they have started him on IV fluids with another bag of potassium. They have decided to admit him so they can continue to administer potassium. They have him hooked up to a heart monitor. The doctor said with his potassium so low, if we took him home and his levels stayed low, he could go into cardiac arrest. At this point, I don't know why it's so low. The only answer the doctor could give us was it might be from the vomiting.

The potassium burns going through his iv. He was in a lot of pain and wanted them to stop it. The nurse brought in cold and heat packs to help. They also are running additional fluids through his IV to help dilute it.
on September 17, 2017