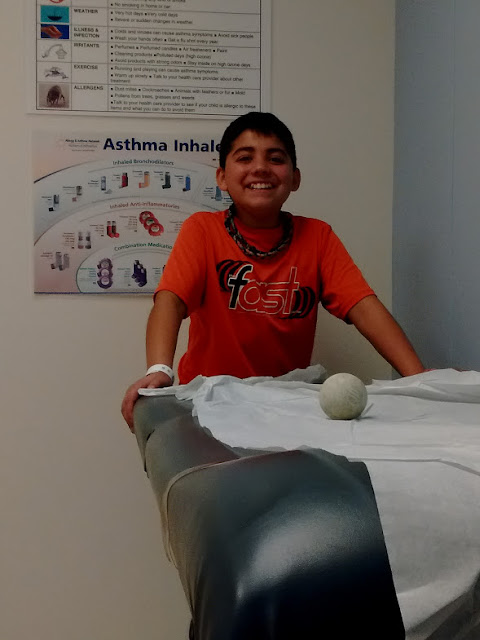 Had another fairly good CF clinic appointment. He is now 100 lbs! Triple digits! The formula is working great, and he is absorbing most of it. He isn't eating a whole lot, but they aren't really concerned with that right now since our goal at the moment is to get him growing taller. Which isn't really happening. In a few months, he's only grown a tiny amount. We have not heard back from the endocrinologist since the last appointment, so our GI doctor is going to put in another referral. He is going to need an X-ray for bone age to rule out any osteopenia. While their at it, they will do an X-ray to make sure his scoliosis hasn't progressed. We are facing a real possibility of growth hormones, which can put him at an increased risk of CF related diabetes, so the endocrinologist will need to evaluate the risk versus the benefit of getting him to grow. The GI doctor said with the X-rays and all these months of aggressively gaining weight without growing will provide evidence to the endocrinologist that we have tried to get his body to grow on it's own. It is not clear why children with CF sometimes do not grow as they should, even with above optimum nutrition

Azer's Mic-key button has been bothering him a great deal lately. Apparently within a few months, he outgrew his last size, so an ostomy nurse came and put in a larger size. He said it felt so much better after. 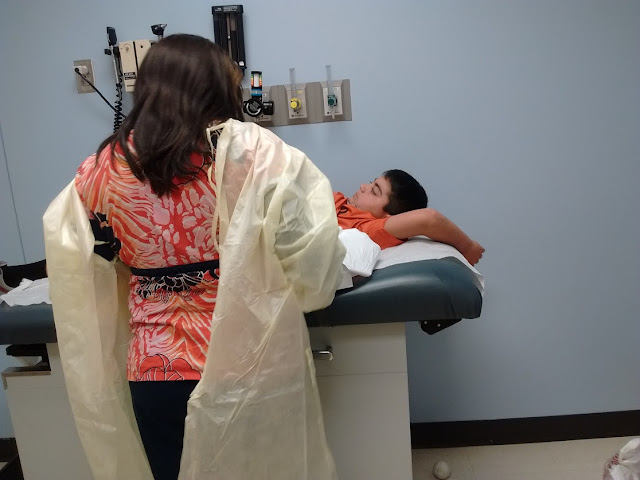 The erythromycin has been working very well to control his feelings of bloating and fullness, although it doesn't seem to be actually making the stomach empty faster. The CF doctor wants us to discontinue azithromycin, since they both are in the same class of drug, and he has not cultured pseudomonas since 2013. She mentioned that if he does culture Pseudo again, we can put him back on azithromycin at that time. Some studies have shown that azithromycin can prevent pseudomonas from growing a biofilm, which is like a shield that it can grow to prevent antibiotics from killing it.

During spring break, our GI doctor would like us to back the bethanechol to twice a day instead of with every meal.

We all had a virus come through the household about a week ago, and as can often happen with Azer, the virus left, but the congestion in his lungs can stay and get worse in a short time. His cough was concerning to her, so she wants to put him on an oral antibiotic for a few weeks to help his lungs clear the junk out. His Fev1 was 86%, which both the doctor and I agreed wasn't bad, but we know he can blow higher.

Our CF clinic is beginning to test CF patients 12 years and older for depression and anxiety, which will be confidential between him and the doctors. It is good that they have started this early, so if he has issues later in life, he will hopefully feel confident enough to share any of those feelings with them before they become issues.