PICC Line is out!

Yesterday was Azer's follow up appointment with our CF doctor. We have been working hard to get his lungs clear by running in the mornings again (until he sprained his ankle Tuesday lol), and manual CPT. The GI doctor was able to get his reflux under control to the point where he has had almost no trouble with it at all, so coughing all the junk out has been much easier. Doing IV's at home is always a bit challenging, but in the end, it is always worth it for him as he gets to play with his friends and ride bikes. Of course, there were moments of longingly looking at the swimming pool.

We have been very vigilant about keeping up with the bolus feeds, and saw the rewards of our labor. He is nearly 77 lbs, and for the first time in his life, he is finally over the 75 lbs! He also grew about a quarter of an inch in a month. The doctor still wants to see his weight closer to the 50th percentile, and hopes if we get his weight higher, that his height will inch back up towards the 25th percentile.

He got a 92% on his PFT's. I was surprised it was lower than when he was in the hospital. The doctor took time to explain that because he got taller, the calculations for lung volume can change slightly. I feel like no mater how many times they explain what all the other numbers on the PFT's mean, it still never makes complete sense!

The doctor felt like Azer had spent enough time on IV antibiotics to have his PICC line removed yesterday. 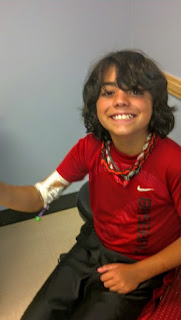 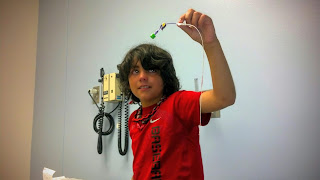 Because Azer has been playing a lot outdoors, he has been sweating too. This can cause the sticky dressing to come lose, and expose the wound to infection, so we've had to use extra dressing to keep it on.  The removal of the actual catheter isn't painful at all, but removing the dressing (or any dressing changes) can be very painful. It is much worse than removing a band-aid, as the special dressing they use is meant to stick as well as stitches. Cleaning the area stings as well, because removing the bandages does cause some skin irritation.

We are going to do another week of oral antibiotics just to make sure that he stays clear for a good while.

Luckily, his sprained ankle is healing quickly, and he was able to get some batting practice in for the first time in two weeks! 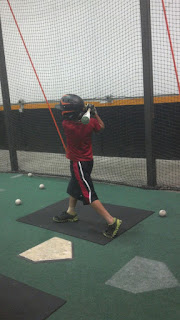