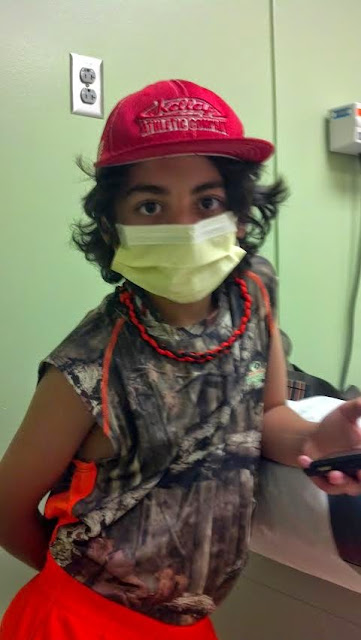 After the last sick visit, he was prescribed some pretty tough antibiotics along with a brief time on steroids. His cough improved temporarily but his cough came back again. So this was a follow-up and sick visit.

He gained a few pounds this time (despite his poor appetite) which is fantastic. They are still pushing for more calories because his growth is just so slow lately, and his height percentile is tapering from where it used to be. We will be switching to a higher calorie formula, which should push a few more calories per ounce.

He has been having a lot of issues with reflux, but our GI doctor decided a few weeks ago to try a different type, and it seems to be working. We may have to try a course of Flagyl soon if he still continues to have issues. We are also increasing his Bethanechol which helps his stomach move food along faster.

His salt was a little low, and I will be adding salt to some of his G-tube feeds as it is a struggle to get him to drink one (1) bottle of Gatorade a day.

His Fev1 was 79%. I know it can be much higher. So, we had a choice. Do another long course of oral antibiotics (the last course just cleared all the bacteria out of his colon and his very hard on his stomach, which means lots of time in the bathroom), or do a course of IV antibiotics to clear him out. Doing IV antibiotics seems to be the best choice at this time. It's been a few years since his last tune up, so it is needed. The good news is he has only been culturing bacteria that responds well to broad spectrum antibiotics. The plan is to wait until school is out, go in for the PICC line and some X-rays, and then do the rest of the IV antibiotics at home. Hopefully this will clear all the junk out of his lungs so he can have a summer free from antibiotics, steroids and IV's!

We are still participating in the CF walk this Saturday. It will be rain or shine, so I hope to see everyone there!!!