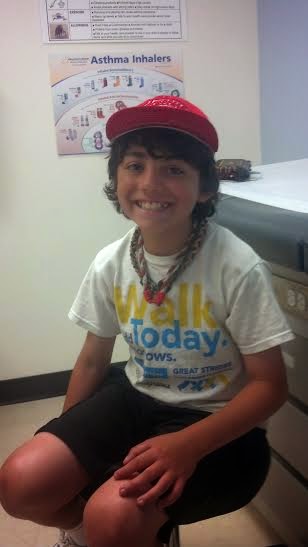 At Azer's clinic visit three months ago, the doctor noticed his growth was starting to plateau out. Since then, he has been doing 5 cans of formula a day through his G-tube instead of 4. Three at night, one in the morning, and one when he gets home from school. He gained 4 lbs in 3 months, and grew almost a whole inch. I believe it's working unless his long hair is adding to the weight!

He got a few colds over the last few months, and the last one just seemed to stick in his lungs. His Fev1 was down to 81%. He has been junky for weeks. The doctor is putting him on oral Bactrim for 2 weeks unless he has cultured something that would need different treatment. They also tested his IGE level again to see if it's up. I'm really hoping not. I feel like the last ABPA took so long to treat, and he was on Prednisone for months! Hopefully the oral antibiotics will get his lungs feeling better again. He commented recently how much relief he gets from manual CPT and running, so we have been doing both without fail!
on March 26, 2015