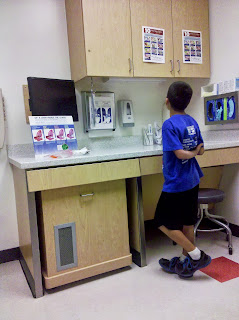 Well, he has lost another pound since his last clinic visit. His Fev1 is down to 81%. I should note though that I recently found out that he has not been taking some of his medications, and trying to do the Vest for a short amount of time. So, all of the responsibility of treatments is now on me. I have been extremely blunt about the future of his life if he keeps short changing himself.
The doctor had a good talk with him about why it's important to do his treatments. The doctor brought up the new Vertex medicine, and then the social worker and the nurse came in and talked about what they had learned at the recent CF conference. We all had goosebumps and I am completely amazed at how it is already changing people's lives. I am also amazed that CFers weight becomes normal when taking it. The doctor said it would be a few more years before it would be available for Azer to take. But the one thing they stressed over and over to him was, when he starts taking it, they want his lung function to be the best it can possibly be. It is possible that when he begins the new medicine, it could help him keep normal lung function for the rest of his life. If that isn't a motivator, I don't know what is!!
Also, they saw how extremely important running and being athletic helps CF in the long run. They had several adults with CF, and that was one thing they all had in common, being athletic and consistently exercising.
Lydia
www.AzersCFWebsite.com
on May 31, 2013