At our last visit with the GI doctor, she mentioned Azer could get a flatter G-button. Azer has been excited about it ever since.  So, last week was the appointment to put it in. I could do it, but something about getting insurance to cover it, it had to be placed by the nurse the first time. When she pulled his Mic-key out, she said his stoma is one of the best she's ever seen. 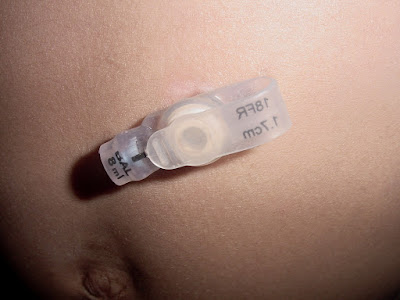 It is an AMT Mini One button. 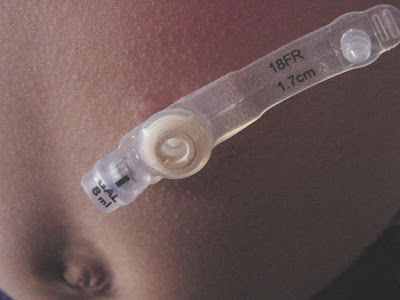 It can use the same extensions as the popular Mic-key button. 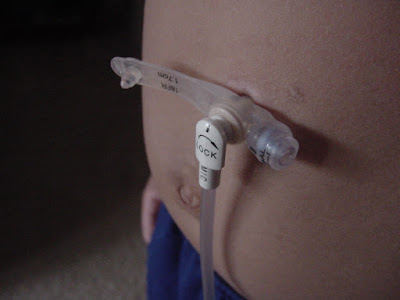 I like the extensions that come with it though. The medication port usually pops open on it's own on the Mic-key extensions.

But, this has been made out of some thicker, stickier sort of silicone. 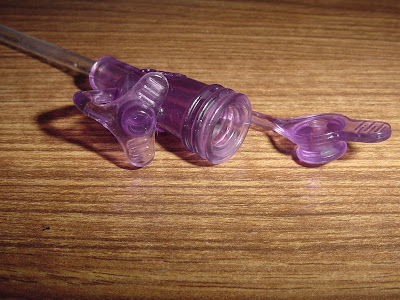 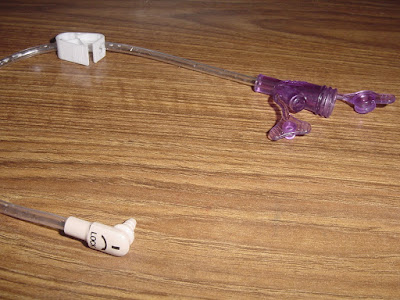 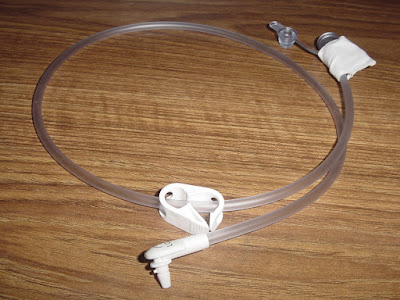 So, we don't need to tape that part like we usually do.

The button itself isn't as "tall" as the Mic-key, so it is flatter to his body. Nice that it doesn't stick out so much. It is also more flexible. The nurse mentioned that it is a little harder to get the extension in, but Azer doesn't have any trouble with it. This button sits "above" the skin like the Mic-key does, so it allows for air flow under the button, as well. The balloon that sits inside the stomach wall is shaped more oval, and is supposed to provide a better seal to minimize leaking. Another interesting thing is that you can adjust how much water is in the balloon based on comfort. Azer came home with 8 ml's of water in the balloon, but he said it "tickled". I think he could feel the balloon on the inside. I took out 2 ml's of water, and he said he couldn't feel it there anymore, so I guess we got it right.
on April 24, 2011 1 comment:

This weekend was the CF Family Info Day at our clinic. It was fantastic, and I learned SO MUCH! I even met two lovely ladies from CysticLife.org which was very cool. It made me feel like I'm not the only one going through all this! It was just amazing to sit in a room filled with people that either have CF, or were parents/guardians of people with CF, and they all have the same kind of thinking. Some were in the very beginning of their CF journey, and some had been dealing with it for more than 20 years. It was also amazing to hear one of our pulmonologists speaking in such great deal about CF, and possible future medications. A small group of us got to "pick her brains" for a while at the end, too. It really makes me appreciate what a great CF team we really have. I felt like a kid pointing out to my CysticLife friend all the amazing people on our CF team.

Azer has been doing great, I think. He threw up a few days ago, had a sore throat and a fever. The next day, he was fine. This week, Reema ended up with the same thing, so it was obviously a virus. I have noticed that when Azer gets a virus, he recovers from it much more quickly than Reema (unless it's the kind that graduates into your chest).

I have noticed improvements in his pain when he takes ibuprofen before we run, or before he has practice. I gotta say, I also notice when he does not take it. So, it is helping. I'm trying to keep plenty of salt in his body by adding some to his Gatorade, to his morning bolus and his night feed.
on April 11, 2011 2 comments:

The doctor said Azer looked healthy and great. It's just those darn numbers.

He lost a whole pound. But, I suppose we can blame that on how much running we've been doing. Plus, he hasn't been eating but one meal a day. Lunch time is only a snack.

His FEV1 was only 78% today. After the doctor listened to him (his lungs sounded crackly and wheezy), the doc sent us back to do a breathing treatment. I don't remember the name of the medicine Azer inhaled, but it basically was a strong type of Albuterol. We did a second PFT test 10 minutes after that, and his FEV1 was 77%. So, clinically, there was no difference made by the medication.

The doctor said that even though his allergy tests did show he was allergic to Aspergillus and lots of other things, it wasn't high enough to make the doctor think Azer needs allergy shots. So, we are going to try Flovent three times a day, instead of twice a day.

I've always said Azer gets leg pains during exercise. Sometimes it seems like Gatorade helps, most of the time, it doesn't though. Sometimes when we run, Azer has such severe leg pain that he cries. It happened at his last baseball game. He was crying because his legs hurt that bad. Time and time again, I've asked the doctors and pediatricians. Nobody has a clue. The pediatricians wrote it off as grown pains, only because they couldn't say it was anything else. Our doctor said today that it was possible Azer has arthritis. Arthritis. That word freaks me out. The good news is, the doctor said Cystic Fibrosis related arthritis isn't known to cause degeneration of the joints. Ibuprofen is supposed to help a lot. So, I guess I should plan on giving him ibuprofen before any physical activity.

Otherwise, the doctor was very happy with Azer's overall appearance, and he wasn't too concerned about  Azer's noisy sounding lungs and weight loss. I wish I could say the same about myself!
on April 05, 2011 3 comments: