Well, I was so sure his PFT  results today was going to be terrible, as his wet cough is still there. He blew 95% FEV1 which is the best result since 2009. The doctor was pretty amazed at that result. He lost a few ounces, but grew a little bit. They aren't extremely concerned with his weight, but the dietitian wants me to try to add a half a can extra through his G-tube.

The dietitian made me feel more relaxed as far as Azer not eating. She was basically saying there is no reason to be forcing food in his face if he is just not hungry. So, I guess at this point we are focusing less on eating and are being a bit more dependent on the G-tube. I'm not sure how I feel about that, since they have mentioned they didn't want him to be completely dependent on the G-tube, but I am so grateful that we have it as a tool to fight CF! 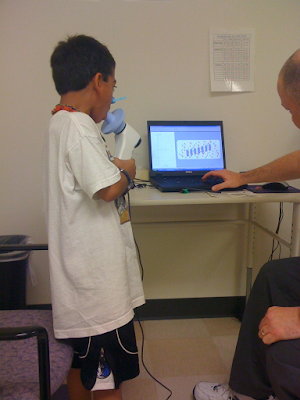 Well, I am just thrilled about his lung function! I guess we are going to keep on running!!