Today was Azer's appointment with the GI CF specialist. The dieticians and the GI doctor felt that Azer would benefit from  Erythromycin, which is an antibiotic but also works to to move things through the digestive system faster. http://www.medscape.com/viewarticle/448278  This is the goal, apparently. To move the formula and food through faster. Hopefully he will then be more hungry for food, and less full of formula. Unfortunately, I need to give this medication 4 times a day, and one of those doses is about halfway through his night feed. Yay for waking up in the middle of the night.

We are only doing one bolus feed in the morning. The GI doctor explained about how the stomach changes it's "position" when it is full of formula. So, this may be why he is having much more trouble with reflux now. They prescribed liquid Zantac in addition to the Nexium he is already on to try to make it more comfortable for him.

Don't get confused now. He's taking Zantac for reflux and Zyrtec for allergies. Being honest here ... I am never going to get those two straight.

He really has not gained any weight since December, so they said that if his weight doesn't improve, they may put him on a higher calorie formula next month.

His FEV1 in December was 90%, and today the best he could blow was 70%. Yikes. But, they weren't too concerned seeing that it is cold outside, and he has been off of his Flovent for a while now. So, they also prescribed an oral steriod to kind of "hold the tide over" until we get the Flovent, which should be next week. He will also be taking Augmentin (general antibiotic) for 14 days.

After the doctor visit, we went downstairs for X-rays  and labs. He cried a tiny bit when the lady stuck him. :(


And here he is demonstrating how he stands for an X-ray. He is holding his breath, which is what they normally do for a pulmonary image. 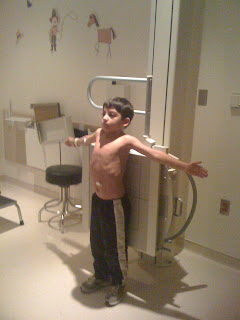 After spending 5 hours at the hospital, we are all spent and exhausted. I am still working through wrapping my head around ALL of these medications.
on January 14, 2011