So, remember in the last post, I had tried to increase Azer's enzymes, and it caused him to be "vomiting" over the toilet for like 30 minutes? Well, everytime I try to increase his enzymes, the same thing happens. So, the doctor said that perhaps his weight needs to be higher in order for his body to handle the higher dosage of enzymes, so, they want me to give him 4 cans of formula instead of 3.

It's going ok so far. Sometimes, when we wake up in the morning at the end of the feed, he will feel nauseous, but nothing comes up. He seems to be absorbing the 4 cans better than he did with the 3 cans (odd?).

His appetite ... if that's what you want to call it, has gone into hiding. Well, I suppose I shouldn't expect too much when he's getting almost a liter of formula all night. I haven't been forcing him to eat at all. He'll eat a small amount around dinner time, but that is it. So, we're talking like one slice of pizza, one dollar menu size burger, that amount of food. Not great, but not terrible I guess. He's happy, and has lots of energy, and it looks like he's gaining weight. He's definitely getting taller!

The kids have been swimming almost every day at water parks and swimming pools. Their swimming has improved quite a bit. This year, they can jump of the diving board, and they can do somersaults in the water. They are getting much better at swimming along the bottom of the pool too. I'm proud of both of them.

I started giving Azer slightly more enzymes since the clinic visit. It was doctor's orders. Well, he was retching over the toilet for more than 30 minutes this morning. So ... I am cutting back on the enzymes again. Maybe he is just really sensitive to the higher dose of Amylase? Anyway ... he seems perfectly fine now. I'm kind of glad we have the g-tube right now though; he won't get dehydrated as easy.

Here are some photos from a little while ago. 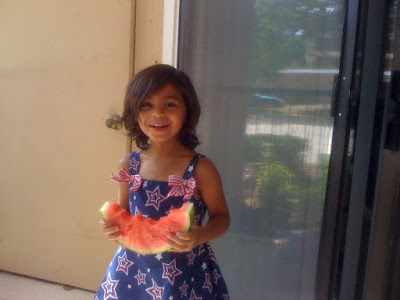 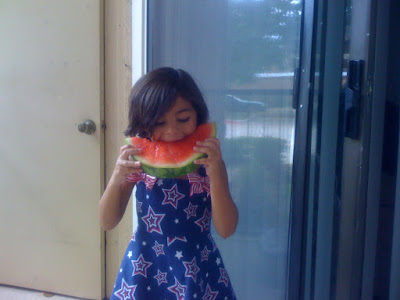 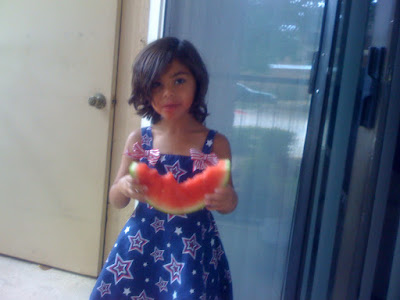 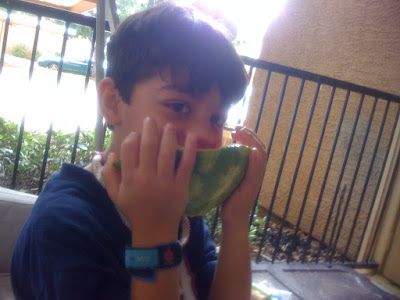 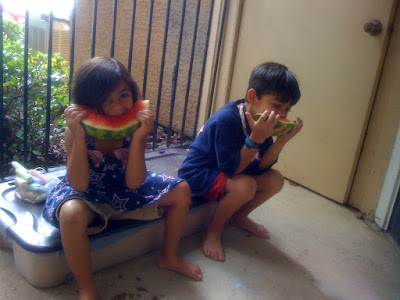 I think it's making him cough more than the vest does ... which is a good thing! 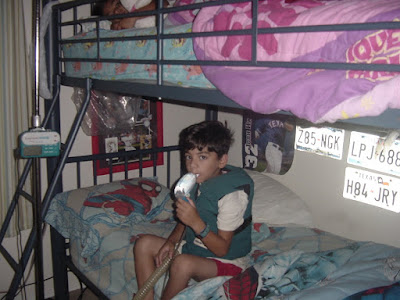 So, like others that expect to see great results after getting a g-tube .... tada ... he gained two pounds in about 4 weeks. He grew 2 cm too!

His PFT's were kind of low today, his FEV1 was 75%, which is low for him, but the doctor thinks perhaps it was low because he had some abdominal distension. Otherwise, he overall looks really awesome!

Well, we aren't just happy because of a great clinic day. Our friend from Child Life had just gotten a message that someone donated some Rangers tickets. Guess what lucky kid gets to go to a Rangers game this weekend? 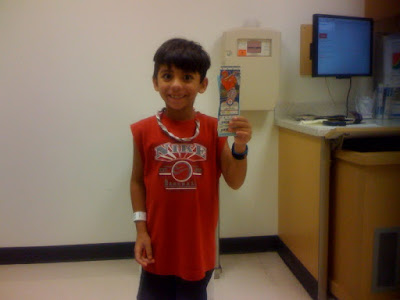 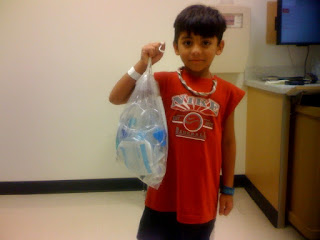 We got some other "goodies" too. To quote a joke from a much earlier blog post I made, "You know you've been dealing with CF too long:  When your after clinic routine at home looks like a hazmat exercise." That one still makes me laugh.

The respiratory therapist gave us an Acapella today. We can attach a nebulizer cup to it so he can take his Albuterol while doing that.

Today, during clinic, I was asking the nurse where I can get more syringes for flushing his Mickey button. She said I can find them at the drug store. Azer quickly came up with something funny: "The drug store? Oh ... so I take drugs, hu? Lots and lots of drugs! I'm all drugged up!"
on July 01, 2010 2 comments: