Well, yesterday it was looking like Azer wasn't going to get his PICC line again, but some strings were pulled (I guess), and Azer was called down to get a PICC line. The last time Azer got a PICC line, he was put on different sedatives, and when he was waking up from the sedation, it was a strange experience. The doctors had told me at that time not to talk to him in recovery because he wasn't really awake, and that it would make him upset. They said that one type of sedative they had given kind of distorts reality (freaky!). 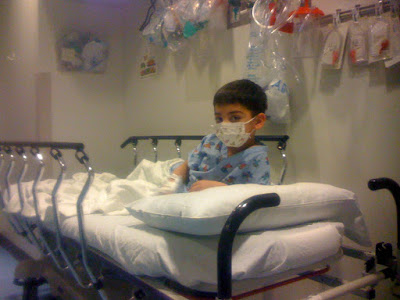 This time, we saw an anesthesiologist, who explained that Azer would be put under general anesthesia. The way I understood it, it was the same type they use during surgery, but they didn't use as much of the medication. Azer was nervous when the doctor was talking about what would happen, but I think he was just afraid of the unknown. They gave him a sedative that made him sleepy and goofy, and Azer doesn't remember anything after that. Everything went well, and he came out with a nice, clean looking PICC line. 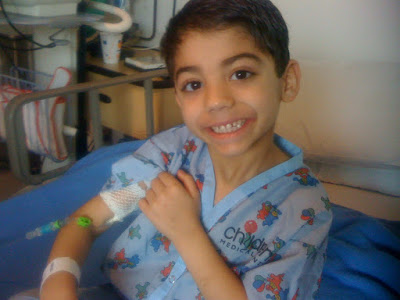 In recovery, he was really quiet, and it took him a few hours to act "normal". They gave him the cutest teddy bear while he was waking up. 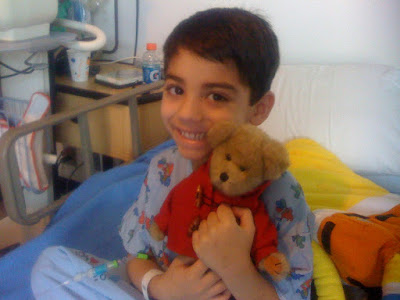 After a few hours, he was bouncing off the walls like usual. He said he was feeling much better and that he was "noxious" again (short for obnoxious). So, I think maybe he wasn't feeling as good as he could have, and he just didn't know it.

He hasn't been eating very much here, even though he can eat anything he wants. I hope he starts eating more soon.

I'm glad everything went well with the PICC line. That makes things so much easier.

And YAY for the increase in PFT's!!!

I never ate much when I was admitted to the hospital. I, like Azer, could eat anything I wanted, but didn't like the food. My parents and friends/family would bring me "outside" food as much as possible. But usually instead of gaining weight in the hospital, I lost weight, but would always put it back on when I got home. So I can definitely relate. Maybe he will drink some milkshakes or something similar to make up for the food he's not eating. Good luck with that. I'll be praying that gets better.

Yes, hopefully he starts to really shovel the food down soon!