Clubbing ... and you don't even need a date

I knew it was going to happen eventually: clubbing of the finger nails. A nurse pointed it out tonight, that Azer had some beginning clubbing on his fingers. I feel very positive about his weight gain, and the improvement in his PFT's, but just looking at his fingers makes me feel like the disease is just progressing like it should, and there is nothing I can do about it. It's like I fool myself thinking that if I do all his treatments, and force food down his throat, whatever comes next won't happen. 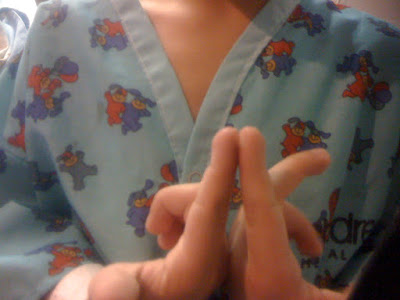 Finger clubbing can happen in someone who might have low oxygen, or in people with lung or heart disease.

Someone told me a few days ago that if Azer wants to play baseball, we can put him in the outfield so he won't have to run around so much. It's almost like they expect him not to be able to run as hard or as fast as other kids, and I feel like I need to defend the fact that he can do anything any other child can do. It's like I say it because I want it to stay that way, forever.
on February 13, 2010

I know the feeling. :( A few clinic appointments ago Ojaio's nurse pointed this out to us also. I hate that it bothers me as much as it does. It's aesthetic, it really shouldn't matter. But it's just as painful as any other CF symptom.

I hope you guys get out of there soon! I know how draining it is to be in there.