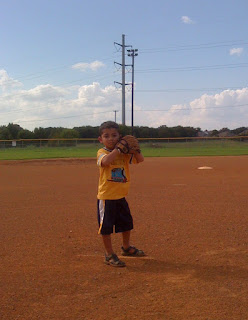 Azer has been excelling at his pitching skills a lot. He doesn't seem to have any problems breathing when he runs, and he is really loving baseball. Hopefully, next year he can join a T-ball league of some sort.

Reema learned how to whistle a few days ago, so that's pretty much all to be heard coming from our house lately. She doesn't whistle any tune in particular, just random notes.

I realized this is going to be the last fall, winter and spring I spend with them where they don't have to go to school in the daytime. I feel proud but sad at the same time, and a little scared too. They will both be starting next year. My two babies somehow grew into kids.

Next month I'm going to have a 5 year old. Its hard to believe. They both seem to be extremely brilliant about figuring things out. When I told Azer that both he and his sister are going to school next year he said, "Gee Mommy, what are you going to do when the house is so quiet?" It's so funny ... even he realizes they make quite a bunch of noise when their together.

Azer has been eating better lately, now that the pressure is off. No problems getting his supplemental drinks in there either. We have another CF clinic day in November. Hoping for some more weight gaining. He seems to be getting much stronger lately. He has been doing sit-ups (trying to copy my attempts at getting rid of flab, hehe). His pitching arm (left arm) is getting some nice little muscles!
on September 19, 2008