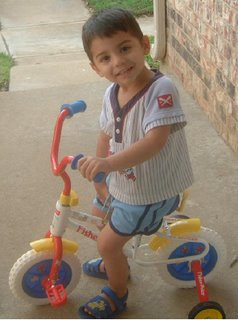 Azer has been looking pale every now and then, especially on days he doesn't eat enough meat or cheese. I have been concerned about this, so I brought it up at Azer's latest doctor's appointment. All of Azer's blood tests came back normal, and his chest x-ray looked good. The doctor doesn't know the cause of his paleness, since he is not anemic.

Regardless of what he looks like, Azer has plenty of energy. In about 2 days, he finally learned how to ride his tricycle! So, a few days later, we ran out and bought him a small bike. He can really go fast and it is hard to keep up with him sometimes. Its funny to watch because the bike is so small. Azer likes to go over the speed bumps in the parking. The first time he did that, I thought the bike would tip over, and I ran to catch him, but before I could get to him, he picked up his speed, bumped right over it. He will be 3 years old in October and he is already giving me gray hairs!
on September 15, 2006

You are a very strong person. Some one dear to me has CF. So, I know what it is sort of like. But, stay strong.

Thank you so much for your comments. I hope your dear one with CF keeps healthy.