Ever since Azer was put on antibiotics a few weeks ago, his sense of smell started returning. We were recently on vacation and stopped doing the nasal rinses then. We noticed he was breathing better out of his nose. On the way back home, it was almost like telling a blind person what they see. He kept asking what he was smelling. It's very encouraging.

So, we told the ENT doctor about what we haven't been doing. He said to keep not doing what we've been not doing. Lol. 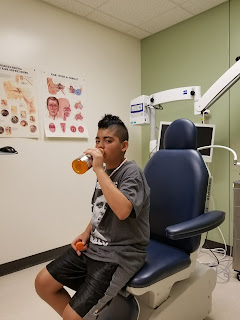 Again, they squirted lidocain up his nose and waited a few minutes for it to work before looking up his nose. He drank some Gatorade after to get the taste out of his mouth. 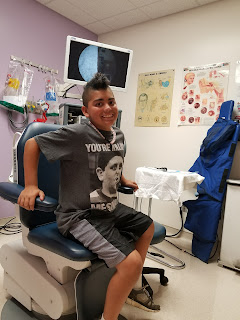 The doctor still saw new polyps, but the inflammation was decreased, and he said it looked pretty good for a person with Cystic Fibrosis. 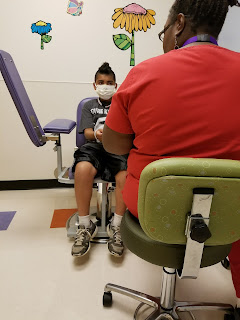 After ENT, we had to go to labs again. On his blood work from CF Clinic, his IgE was elevated, and they wanted to make sure he hasn't developed ABPA again. However, his sputum culture showed Steno and Staph, so the antibiotics that he's been on have definitely helped this.
on June 27, 2017 No comments: 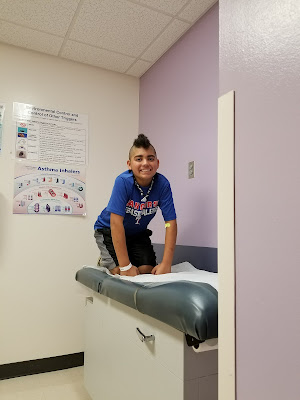 Azer has been able to maintain his weight since the last clinic. The GI doctor was very happy with his weight, and he has grown some, but his height is still plateauing. The GI doctor said that at our next clinic, they will bring in the Endocrinologist and we will discuss growth hormones again. Azer told the GI doctor that he is still willing to start growth hormone shots.

About a week ago, Azer started oral antibiotics after some sinus congestion seemed to move into his chest. He cleared up very quickly after starting the medication, and today his PFT's were 95%, and the doctor said he sounded clear. The doctor said that if the chest congestion returns after he's off of the antibiotics, they may consider putting him on inhaled antibiotics until winter time. Azer told the doctor about how physically active he is, and both the doctor and respiratory therapist were impressed with him, and agree that exercise is so often downplayed when it's one of the most effective airway clearance treatments.

They noted that his blood sugars have been a little high in the past, and that if this one turns out to be borderline again, we may do a month of additional blood sugar testing to ensure it isn't getting dangerously high.

Trying to raise a successful teenager is challenging. Trying to raise one with a chronic health condition definitely is more difficult! Everyone was impressed that Azer has been getting more independent with his care, medications and exercise. 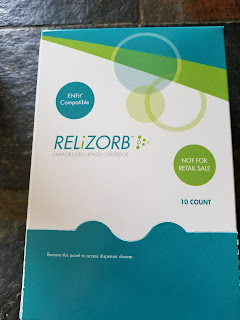 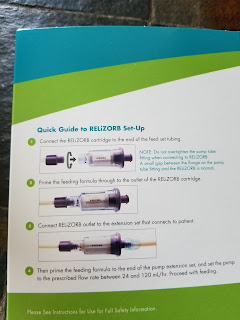 Today, we were introduced to a new product called Relizorb for G-tube feeds. It is basically a cartridge of enzyme beads (Lipase only) that screws onto the bag of formula and gives continuous dosages of enzymes through the feed. Since this product only helps with the absorption of fat, they recommend still taking regular enzymes at the beginning of his night feed. They have already had some great results from other people, so we are looking forward to trying it out!