Well, it seems like for the past few weeks, Azer has been absorbing less and less ... and less. And pooing more and more ... and more. On Tuesday morning before school, he had a huge bowel movement (TMI but that's the way it is), and it was horrible and floating. I knew something was wrong. Same amount of enzymes, but I figured maybe I was just pushing the milkshakes too much. I have been adding heavy whipping cream to most of them just to try to get extra calories into the kid.

At school that day he ended up throwing up ... apparently it was a lot too. I rushed to school right away. He hasn't thrown up in about 3 years. When he got home from school, he pooed about 5 or 6 times. And each time, the whole toilet was full. I don't understand where it was all coming from. All the stools were floating and oily. I called the doctors, and felt like I was struggling to hear a response from them the next day. They are consulting with the GI doctor to see if she has some ideas. In the mean time, the doctor prescribed Flagyl for 14 days, three times a day. It is an antibiotic that treats the overgrowth of bacteria in the intestines (I think). I'm not really sure what else it does. Apparently, sometimes the good bacteria gets overtaken by another kind. So, I am hoping and praying that this actually was the problem. Please pray that it works, because we work so hard to get him to gain weight, and if he isn't absorbing anything, he might lose weight. And we don't want that to happen.

Anyhow ... another baseball game is scheduled for tomorrow night! 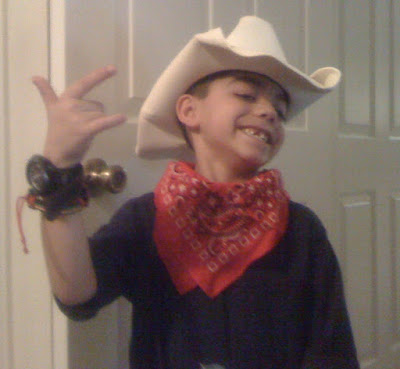 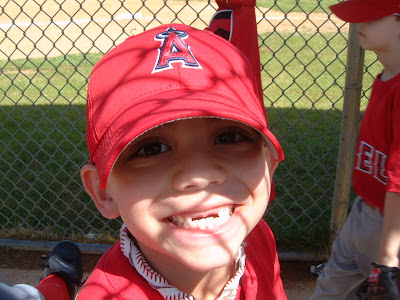 Azer had his first actual game today. He was playing first baseman, and was tagging runners out, one right after another. He did so well, that the coach actually moved him to a different spot during the last inning, so the other team's kids could actually play! 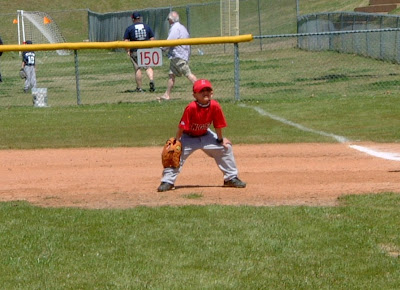 So, today he was walking around like he was a big shot. We all know he is, but let's not blow him up to big now. 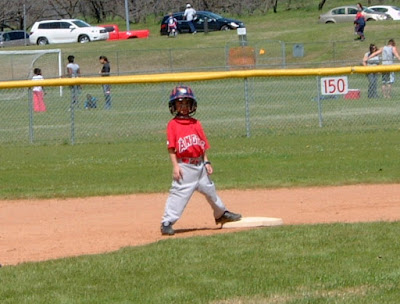 Well, I am not sure if he is gaining or not. I weighed him yesterday and today, and the scale said 43 lbs. I try to weigh him first thing in the morning after he uses the bathroom. He is still enjoying the Scandishakes. I've been leaning on them more instead of pushing him to eat a few more bites, as I figure he's taking in way more calories with the shakes, than in a few bites of food. 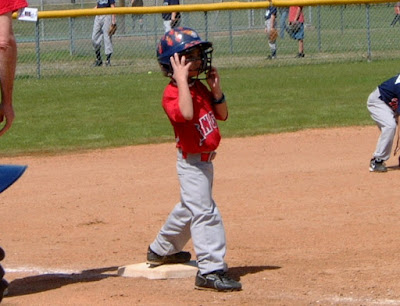 I keep trying to fool myself and say, well maybe he'll gain enough weight so we might not need the G-tube. The fact is, I have a feeling that it's just around the corner. And I don't know if I should just say, Yes, let's go ahead and do this, or if I should wait until it is actually medically necessary. Other parents and people say to me, "Well, he looks fine to me." And yes, he does look fine. His weight is "fine" at this point. I just want to be assured that I can keep his weight as high as possible, no matter what. I want his weight to be the best it can be, instead of just ok.
on March 27, 2010 1 comment:

Well, since we've been doing so many milkshakes a day, I was expecting to see a whole bunch of weight gain. He is 44 lbs, which is the same weight he was when he was discharged from the hospital last month. They are not sure exactly why he didn't gain anything, but the dietitian believes he may need an increase in enzymes, which we will do. The good news is he didn't loose any weight, and he is now about 50th percentile in weight, which is amazing. He has never been at that line before, so I guess we are doing something right!

Some great news ... he got a 98% FEV1 on his Pulmonary function test! That is the best he has ever gotten.

Azer has had a dry cough here and there lately. The respiratory therapist felt it might be from some post nasal drip going down his throat that might be causing some coughing. The doctor prescribed Augmentin for a couple weeks to see if that helps Azer's nose. They also sent us home with something called a NeilMed Sinus Rinse. They said to try it once or twice a day and see if it helps Azer and his sinuses. 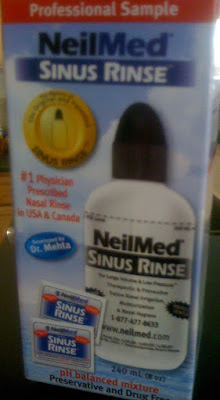 We tried it when we got home. It was kind of interesting. I boiled some water (and let it cool) and then I put a salt packet into the bottle with the water, and then had him lean over the sink and squeezed the bottle. The water just went out the other nostril. We got some gunk out, and he said he felt clearer. I think we need to be more coordinated about it, because snot and water were blowing everywhere. Real lovely. But I don't think you want to see a picture of that.
on March 16, 2010 1 comment:

Some days are just so perfect. It was a warm and windy day, and the lake was making big waves that splashed on the kids. 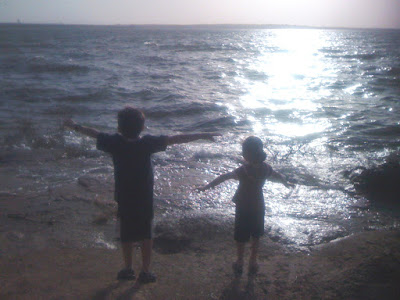 Reema seemed to enjoy being calm near the waves... 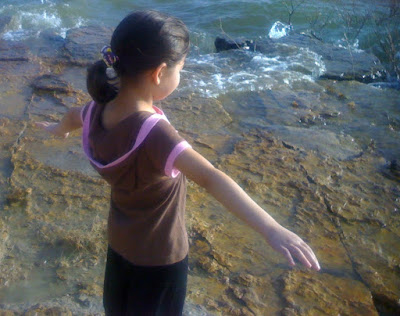 Azer, on the other hand, was a hard person to catch in a photo. 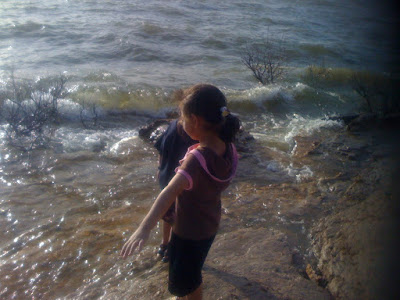 He was constantly in motion. I didn't realize it until I looked at the pictures! 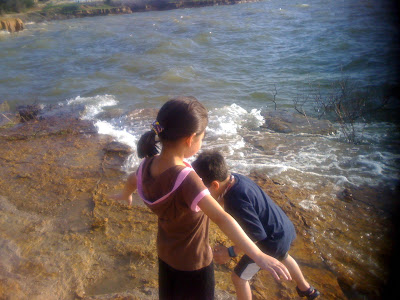 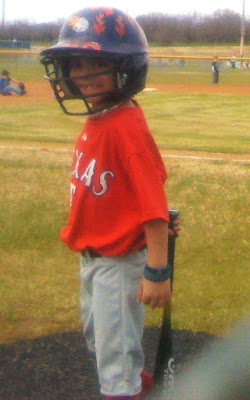 Yesterday, Azer had his first preseason game. I don't think he slept that night, he was so excited! He got his baseball clothes all set out. He hasn't gotten his "official uniform" yet, which is why he is wearing the Texas Rangers. This year, it's the Angels. Azer wanted to go to field an hour before the game ... just to practice. The child has practiced every single day for the entire week.

The game went pretty well ... for 5-6 year olds. Azer did very well. Azer was playing 1st base. There was one great play during the game. Another boy at short stop caught the ball (without missing it!) and threw it to Azer on 1st base, who caught it (again, without missing it!) and tagged the batter out before he could get to base. That was the best moment out of the game! 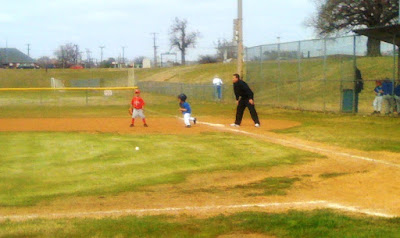 I'm not sure if Azer is getting tired of drinking milkshakes, but they are still going down. Next week is another CF appointment. Hopefully the doctors will be happy with what they see, because we all have been working VERY hard!

Oh yes ... and both of the kiddos lost another tooth last night. On the same night! ... so it was Reema's 2nd, and Azer's 6th tooth. My poor, poor toothless children. 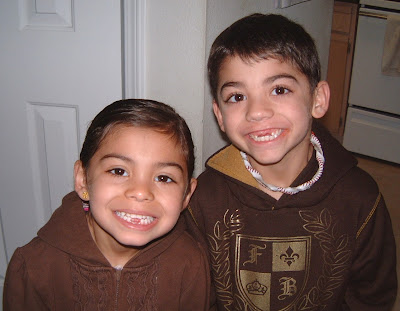